It’s April, and the sun is out (occasionally, very aware I’m writing this and it’s hailing outside…)

Since the Easter holidays are stretching out ahead of us like the writing at the beginning of a Star Wars film, I thought I’d dedicate most of this month’s posts to cheap (or free) ideas for days out around London, since that’s closest to where we live.

You could almost call it ~April Adventures~ if you were feeling that way inclined.

The first place I’m going to talk to you about is one of Elliot’s favourite places: Coram’s Fields.

I’ll be honest, it’s not the Alton Towers of playgrounds, so don’t go expecting the world’s best climbing frames. However, for a five year old – it’s an absolute dream. And for a parent – IT’S FREE.

Elliot adores it there and has can spend hours playing with everything. There’s a few different areas in the park, from a tall climbing frame with slides and a zip wire in one corner to a sandpit and some smaller structures in another, and Elliot at age five is the perfect size for both.

They’ve also got rabbits and a goat, which I think every park needs. All we have in the park round the corner from my house is broken glass all over the floor and a man asleep outside the garages opposite the entrance gate.

Another good thing is that Coram’s Fields has the rule that adults can’t go in there without a child accompanying them – meaning you won’t get any strange characters clutching a can of Stella outside the chicken coop.

Oh, yeah – they have chickens too!

The adult-free aspect of the park is great, in my opinion, because I can give Elliot free reign, basically. (As well as no adults being allowed – there’s normally someone manning the entrance gate plus it’s very heavy so even if he made his way over to the access gate he’s not going to get out of it before I catch him.) I can plonk myself on a bench and half cheer him on as he goes down the same slide twenty times and half check Twitter for Brexit updates without feeling like a complete failure of a mother.

It’s just basically an adorable green space in Central London, in a really handy area. It’s just behind Great Ormond Street Hospital so if you ever have to go there for a hospital appointment, you can bribe your child with a trip to the playground. It’s a short walk to the British Museum, and will serve as a calming slice of quiet after the madness that is a museum during half term. It’s also not far from Kings Cross, so you can easily get home afterwards.

To complete the day, there’s also a shopping complex – the Brunswick just around the corner that has a Giraffe, Nandos and a Starbucks so is perfect for grabbing a coffee to go to the park with and also for grabbing some halloumi afterwards.

My final and possibly most important point is that the toilets at Coram’s Fields are some of the nicest public toilets I’ve been to. They’re not portaloos, they’re in an actual building and they must be regularly cleaned because they’re always in a decent state when I’ve been.

It’s nearly Halloween, I own an Instagram account, I could tentatively call myself a blogger. You don’t get a prize for guessing what I got up to on Saturday afternoon.

Yep, pumpkin picking! It’s become a bit of a tradition of ours to go every year, since I love all things autumnal and Elliot loves all things orange. It just makes sense!

Where is it? We always go to PYO Pumpkins in Hoo, Kent. We find it’s got some good quality pumpkins, it’s quite easy to walk around and it’s just got a really nice, friendly vibe about it. (Other than the man who was wearing a pink skeleton mask and was riding round on a tractor – Elliot was convinced he was there to eat us all…) It’s a bit of a drive away from anywhere, but it’s definitely worth it.

What’s there then? …pumpkins, obviously? There’s fields and fields of pumpkins, squashes and various other veg. There’s a shop of Halloween tat which is always good to spend a few quid in and a burger van where we have our annual sausage and bacon roll and hot chocolate every year. It’s very Instagrammable and will get you excited for autumn. Plus you get to wheel your kids around in wheelbarrows which is always fun.

Marks out of ten? I’d give it a good 8, especially as it was a lovely day when we went. It’s free entry, and the pumpkins are reasonably priced (we got 14 pumpkins, including some proper bigguns for £12 which really isn’t bad.) The only downside this year was that in previous years they’ve had various spooky activities going on around the field and that was missing this year. I remember last year there was a caravan which was made up to look spooky, and that was missing but I have a feeling they’d just grown the pumpkins in a different field and don’t blame them for not wanting to drag a caravan around the farm for the sake of a skeleton in a cupboard.

PYO Pumpkins is open until 28th October, so if your half term is still going, I’d get down there quick and get yourself some pumpkins!

Over the summer holidays, I tried to make sure Elliot and I got out and about as much as possible and learn something different every now and then. Since London is only 40 minutes away on the train, we popped up there quite a few times.

One of those jaunts was to The Postal Museum because I’d heard people raving about it (thanks Instagram…) and genuinely wanted to explore the history of post, as it’s something I’ve never really known much about before. I know it sounds a bit dry but trust me, it was actually decent. They also had an exhibition called Mail Rail, which was about the tiny trains that carried post around London during the war, but I’d assumed Elliot wouldn’t be interested in that. Spoiler: I was wrong.

I thought I’d tell you all about the day as it was genuinely a really good day out.

Where is it? So, it’s right next to the massive postal depot in the middle of London. I’m no expert but according to Google Maps, it’s near Clerkenwell and Farringdon and St Pancras areas of London. But what we did was: get the train from Charing Cross to Russell Square and then walked from there, and it was about a 20 minute walk from there.

One good thing they’ve got on their website though was maps from the closest stations to the museum which is not only handy, but also interesting as they included interesting points that you could look out for on the way. For example, on our walk from Russell Square, we walked past J.M. Barrie’s house AND the road where Charles Dickens lived when he was in London. (Sorry for the essay, I found this really exciting and thought it was a brilliant touch to get children a bit more excited about walking to the museum, because walking anywhere with a child is like wading through mud.) 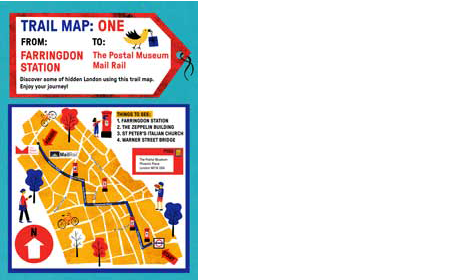 What’s there then? So you’ve got the exhibitions, which is all about the history of the postal service – something I had NO idea about. I found it really interesting learning about the postal service during the wars, and the lengths the postal workers went to to make sure the mail was delivered. There are trails for children to do as they go round, and Elliot wasn’t really feeling doing every activity but he enjoyed the different uniforms and post boxes – and finding the Jolly Postman in all his hiding places.

There’s also Mail Rail, which is the old tunnels and tiny trains that used to carry the post around London before they had vans and that which was very interesting albeit a tiny bit small. Elliot LOVED this and really enjoyed going through the tunnels. A word of warning though – you do have to leave your bag in a cupboard at the beginning as they won’t fit on the train (told you it was small!) and I also whacked my head on the door as I got in so I was a bit grumbly.

They also have a play area for under-5’s which is absolutely cracking. It includes a play sorting office where your children can dress up in little Royal Mail hi-viz’s and sort the post just with added slides. You can buy a ticket just for the play area and that’s £5 for an hour and I’d definitely recommend that if you’re in the area and have a younger child who wouldn’t be as interested in the exhibitions.

Marks out of ten? I think I’d give it a solid 7 because the Mail Rail is cool, and there were good points for me and Elliot between the play area and the exhibitions. It does lose marks for the price, as I’m so used to going to free museums or paying for a ticket and it then lasting a year, as we’ve done recently with the Chatham Dockyard.

I’d recommend if your child is a little bit older, as if they’re under 3 they probably won’t enjoy the exhibitions as much BUT if you’re in the Russell Square area with a littlun, you could always head to the play area for an hour and then go to Coram’s Fields which is just around the corner. We also like it there – loads of play equipment, a paddling pool and bunny rabbits. Win, win win.